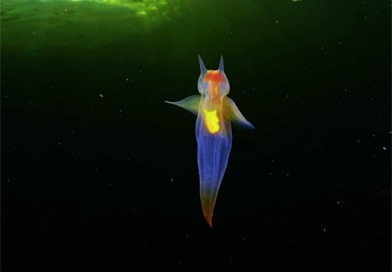 According to researchers, nearly 9 million species live on planet Earth. As part of the ecosystem of this Earth, we are aware of most of these species but there are some which are rare to our sight and knowledge.

Many of these species and animals are also nearing extinction for various reasons like habitat loss, poaching and climate change. Scroll down and have look at these amazing animals that most of us didn’t even know if they existed on our planet.

The Panda Of The Ocean – Vaquita

A Vaquita one of the endangered and the smallest cetacean or marine mammal. They are often called the Panda Of The Ocean and are found in a small area in the north of the Gulf of California. They prefer shallow waters and that’s one of the reasons why these porpoises are on the verge of extinction.

Deep Sea Creature With No eyes

Well, this mysterious dolphin-like creature washed off at the beach of Mexico early this year. This deep-sea creature has no eyes, no fins, and an elongated body but at first sight, it might look like a dolphin. But to be honest, nobody knows what it is.

The blue snailfish (temporary name) was discovered very recently, by a group of researchers, at about 26,000 feet. These creatures have a translucent body with few bones. The strange fact about these snail fishes is that when they are brought to the surface they melt.

A tree-dwelling insect that is expert in camouflaging itself. The spines on its body are a great way to fight off its predators. These insects are selective tenants of the Amazons. The Katydid starts with a high pitch noise to scare other animals and if that’s not enough the thorns on its legs and crown act as a protection to save its life. To add on Katydid also has a solid jaw that is strong enough to make you bleed.

Found in very few regions of South-East Asia these insects have the capacity to drill the bark of a tree. Its attractive appearance makes it a popular insect for researchers and insect collectors.

This insect might make you smile and also make you feel amazed by the creativity of nature. As you might have noticed this insect resembles a face of a man with a short hair cut hence it is also called Man-Faced Stink Bug. Catacanthus Incarnatus measures up-to 1.1 inches in length and is native to South-Eastern Asia.

By just looking at this bird anyone can guess why this bird is so special. No other avian species has such a beautiful hue of blue. The male birds take pride in their blue color and use it to attract their new partners. The bluer the color of the feet more attractive is the male. The bird is native to subtropical and tropical regions of the eastern Pacific Ocean.

The researchers very recently came across this species in the Gulf of Mexico at about 9000 feet. This creature moves slowly with the help of its tentacles. As the name suggests, it is so transparent that anyone can see its digestive organs easily.

Sea angels are extremely small, gelatinous and mostly transparent swimming sea slugs that are found in large groups. They have a wide geographic range, from polar regions, under sea ice, to equatorial (tropic) seas. They get their name from their winged appearance which is like an angel. Although usually slow-moving, beating their wings once or twice per second, they are capable of bursts of speed when they need to pursue their prey.

Found at the depths of more than 9000 feet Gulpers have been noticed to have an enormous mouth, which takes shape of a balloon when the eel has to eat much larger prey. With comparatively smaller teeth, the Gulper Eel uses this technique to prey. According to researchers, it also uses this technique as a defense mechanism.

Pyrosome is a giant sea worm that is found in the upper layers of the open ocean in warm seas. It is nothing but a free-flowing colony of thousands and thousands of individual Zooids and its length can go up to 60 feet. Few deep-sea divers came across this giant worm very recently in the year 2019 on the coast of New Zealand.

This fish was first discovered in 2015 in Western Australia at almost 200 feet. They prefer to live under great depths of the ocean and are elusive to be found. The color of this fish reflects light so good that it acts as camouflage against the predators.